We’re glad to see you’re enjoying ReachMD…
but how about a more personalized experience?

Register for free
0.25 credits
15 minutes
Share
Save
4
LikeLiked
Scroll back to top

Non-small cell lung cancer (NSCLC) accounts for the majority of lung cancer cases and is the leading cause of cancer death in the United States. Estimates for 2019 indicate that NSCLC will account for almost 142,670 deaths despite improvements in targeted treatments for oncogenic alterations, such as mutations in the EGFR (epidermal growth factor receptor) gene and rearrangements of the ALK (anaplastic lymphoma kinase) gene.1 However, the recent emergence of immunotherapy targeting cytotoxic T-lymphocyte-associated protein 4 (CTLA-4), programmed cell death protein 1 (PD-1), and programmed cell death ligand 1 (PD-L1) immune checkpoint inhibitors has now revolutionized therapy for patients with NSCLC that do not present with targetable driver mutations. Initially, PD-1 or -L1 inhibitors including nivolumab, pembrolizumab and atezolizumab were approved as second-line therapy for patients with advanced NSCLC who have failed platinum-based chemotherapy.2 In 2016, pembrolizumab was approved as first-line monotherapy treatment in patients with advanced EGFR- and ALK-negative NSCLC who present with ≥50% of PD-L1 expression. It is estimated that only about a third of newly diagnosed patients with advanced NSCLC express such high levels of PD-L1, which is why very few patients are suitable for first-line pembrolizumab monotherapy.3 Thus, there has been an unmet medical need for additional agents and combinations for the treatment and management of patients with advanced NSCLC.  To this end, several trials are investigating the safety and efficacy of the PD-1, -L1 targeting agents pembrolizumab and atezolizumab in improving outcomes for patients with advanced NSCLC.2 This article has summarized and evaluated data from phase 3 studies in advanced NSCLC that would be useful to inform treatment decisions for the judicious use of PD-L1 targeted agents.

Based on results from the KEYNOTE-024 study, frontline pembrolizumab is now the standard of care for selected patients with advanced NSCLC who present with a PD-L1 expression (tumor proportion score – TPS) of ≥50% without an activating EGFR or ALK aberration. Data from this trial showed that pembrolizumab monotherapy was associated with significant improvement in objective response rates (ORR of 45% versus 28%), longer overall survival (OS of 30.2 months), and increased progression-free survival (PFS of 10.3 versus 6.0 months) as compared with platinum-based chemotherapy. Importantly, safety, tolerability, and quality of life analyses also favor use of pembrolizumab monotherapy among the subset of patients with advanced NSCLC and with no evidence of oncogenic driver mutations that express high levels of PD-L1.3

Given that a very small proportion of patients with advanced NSCLC express greater than 50% PD-L1 TPS, the KEYNOTE-042 trial was designed to determine the utility of pembrolizumab monotherapy among patients that express lower levels of PD-L1. This trial included patients with advanced NSCLC that expressed PD-L1 at three thresholds (≥50%, ≥20%, and ≥1%) and compared the safety and efficacy of pembrolizumab alone versus either carboplatin plus paclitaxel (squamous cell histology) or carboplatin plus pemetrexed (non-squamous cell histology). Although the results indicated that the OS was significantly longer in the pembrolizumab group than in the chemotherapy group in all three TPS populations (≥50%, 20·0 months versus 12·2 months; ≥20%, 17·7 months versus 13·0 months; and ≥1%, 16·7 months versus 12·1 months), the data are actually nuanced, and as seen in figure 1, the curves representing the two therapy arms cross between 6 to 12 months of treatment.4 Experts therefore caution against using frontline pembrolizumab monotherapy for all patients with advanced NSCLC without sensitizing EGFR or ALK alterations that express low PD-L1 TPS. 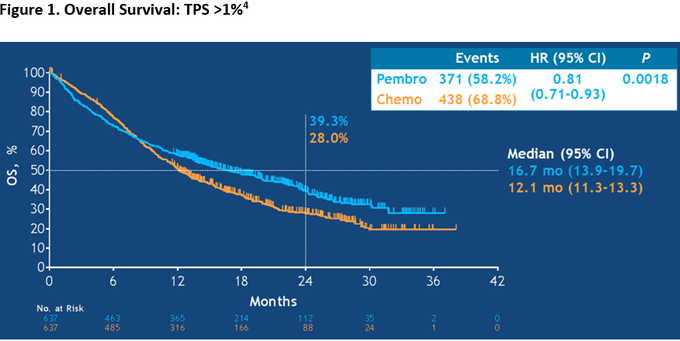 For most fit patients with advanced NSCLC that lack EGFR or ALK mutations, experts now recommend a combination regimen of chemotherapy and pembrolizumab regardless of PD-L1 expression based on results and updates from the KEYNOTE-189 trial.5 In this study, a combination of pembrolizumab plus pemetrexed and a platinum-based drug was associated with significantly longer OS and PFS as compared with chemotherapy alone among patients with advanced, non-squamous NSCLC with any level of PD-L1 level expression.5 Recently, an updated OS analysis confirmed that with an 18.7 months median follow-up, pembrolizumab plus chemotherapy continued to provide longer OS (median 22.0 months versus 10.7 months) (figure 2), which is why it is suggested as first-line therapy among both PD-L1 expressing and PD-L1 non-expressing non-squamous NSCLC.6 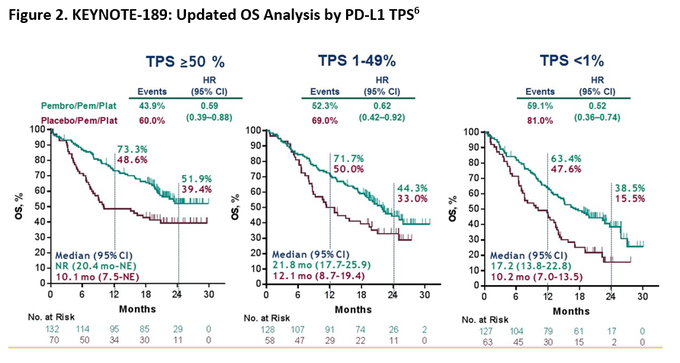 For patients with advanced squamous NSCLC, a combination of pembrolizumab, nab-paclitaxel, and carboplatin is suggested based on results from the KEYNOTE-407 trial, which reported an increased median OS from 11.3 to 15.9 months. As seen in figure 3, this improvement was across all PD-L1 subgroups (TPS < 1%, 1–49%, and ≥50%).7 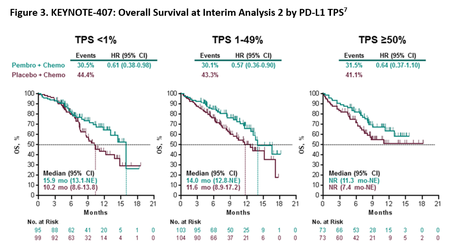 On the other hand, the IMpower-132 study that investigated a different anti-PD-L1 agent, atezolizumab, in combination with carboplatin or cisplatin plus pemetrexed did not show an improved OS and was associated with only an improved PFS in treatment-naïve advanced non-squamous NSCLC in the absence of an activating EGFR or ALK alteration, irrespective of PD-L1 expression.8 Similarly, the IMpower-130 trial determined the efficacy of atezolizumab plus carboplatin and nanoparticle albumin-bound (nab)-paclitaxel and was associated with a trend for OS benefit for patients with advanced, treatment-naïve non-squamous NSCLC.9 Given these results, it is now clear that atezolizumab and pembrolizumab seem to have different efficacies despite both agents targeting the PD-1/PD-L1 axis. However, in the IMpower-150 trial, the quadruplet combination of atezolizumab, bevacizumab, carboplatin, and paclitaxel was associated with a tolerable safety profile and an improved OS as well as PFS along with physical functioning among chemotherapy-naive patients with non-squamous NSCLC.10 Notably, in this trial, the improved OS and PFS were observed regardless of PD-L1 expression and EGFR or ALK genetic alteration status, thereby making this quadruplet regimen applicable to this subset of patients eligible for bevacizumab and also to those ineligible for pemetrexed with borderline renal function.11

Liver metastases is common in advanced NSCLC and identifying safe and efficacious regimens for this subset of patients has been urgently warranted. To this end, a subgroup analysis from KEYNOTE-189 demonstrated superior outcomes (improved OS and PFS) upon treatment with the combination of pembrolizumab, pemetrexed, and a platinum-based therapy among advanced NSCLC patients with liver metastases.12 Similarly, an improved median OS was also reported in patients with baseline liver metastases receiving the quadruplet regimen of atezolizumab, bevacizumab, carboplatin, and paclitaxel.13 This regimen would require no contraindications to bevacizumab and may provide additional benefit in this subset of patients due to the combination of anti-VEGF and anti-PD-L1 agents rather than PD-1/PD-L1 inhibition alone.

Several trials have evaluated the utility of anti-PD-L1 agents and their combinations in the first-line setting in advanced NSCLC. A review of recently reported data and published studies has led to increased acceptance for testing PD-L1 levels along with driver mutations and for using pembrolizumab monotherapy only among patients expressing higher levels of PD-L1, no driver mutations, and a low volume of disease and low volume of disease-related symptoms. For most other patients with advanced NSCLC, including those with squamous and non-squamous histology, irrespective of PD-L1 status, the triplet combination of a platinum agent/pemetrexed/pembrolizumab or the quadruplet regimen of carboplatin, paclitaxel, atezolizumab and bevacizumab is recommended based on data from the KEYNOTE-189 and Impower 150 trials. The question of sequencing immunotherapy after chemotherapy or vice versa, however, remains currently unanswered. The ongoing INSIGNA [NCT03793179] trial has been designed to address these issues and is widely anticipated.14

6. Gadgeel SM, Garassino MC, Esteban E, et al. KEYNOTE-189: Updated OS and progression after the next line of therapy (PFS2) with pembrolizumab (pembro) plus chemo with pemetrexed and platinum vs placebo plus chemo for metastatic nonsquamous NSCLC. Journal of Clinical Oncology. 2019;37(15_suppl):9013-9013.

14. Firstline Pembrolizumab Alone or in Combination With Pemetrexed and Carboplatin in Induction/Maintenance or Postprogression in Treating Patients With Stage IV Non-squamous Non-small Cell Lung Cancer. Available at: https://clinicaltrials.gov/ct2/show/NCT03793179. Accessed August 9, 2019.

You need to be logged in to save this episode to a playlist.

You are now leaving ReachMD.com and going to a site run by another organization.

Press cancel to remain on ReachMD. Press the link below or the continue button to keep going.

Stay current with the best on medical education